“Rules” of the Road

Posted on October 21, 2013 by homelessvagabonds

Hey buddy, go! Hey, taxi, what are you doing?

Some of Miss E’s commentary on her trip to school this morning.

Driving in this town (country) is not for the weak. There is no such thing as defensive driving. Each man for himself seems to be the rule of the road. If there are any driving laws it appears that no one obeys them. Here are a few things we have observed about driving here.

1. Pass whenever you like. In the mountains especially, passing is necessary to get anywhere in a reasonable amount of time. You often find yourself behind a big truck that is finding it difficult to climb up the steep mountains or a small truck with a bed full of locals hitching a rid to the market. Heck, we’ve even seen calves in the back of a small pick up truck. The problem is that people pass these slow moving vehicles anytime they wish, even heading around curves. Luckily there isn’t a ton of traffic in the mountain roads and the roads tend to be wide but we have found ourselves hugging the shoulder to avoid an oncoming car. Eeek!

2. Stop signs are merely a suggestion. In the city you will find people honking at the intersection they are heading through to warn those with the stop sign that they are legally coming through because so many people just ignore the stop signs. What?

3. Left turn on a red light is legal? Plenty of people do this dangerous move. We’re not sure what the true law is but it seems to be okay. Heck, we’ve seen plenty of people just turn left (on a red or green light) from the middle lane of traffic to avoid the left turn lane line perhaps?

4. Red lights are just a suggestion as well. Plenty of traffic continue to head through the intersection even after the light turns red. We saw a bus do it and nearly hit a motorcyclist, a school bus(van) cruised through one, and even a taxi driver honked at someone in front of him until he went through the red light.

5. If you do cut someone off or make an illegal maneuver, just stick your hand out of the window…that makes it okay.

6. Honk as soon as the light turns green. I’m not sure what this accomplishes. Those at the front of the line are still waiting on the people running the red light!

7. There is no need to look before pulling out into traffic. Well, maybe they look but they go anyway. This is especially true for buses.

8. Similarly, people just stop on the side of the road to park or let people out without signaling. Some are nice enough to put on their hazards but that’s usually done just as they stop immediately so then you are stuck behind them until you can move over to the other lane.

9. If you are a taxi driver there are no rules to follow. We have seen a taxi driver go through when a police officer directing everyone to stop. It didn’t seem to bother the cop. Smh!

10. Child restraints are not necessary. I’m sure they think we are crazy with our carseats. I have seen one baby in an infant carseat…in the front passenger seat and I do not believe the seat was actually latched onto anything. Otherwise the baby just sits in a parent’s lap and children are just stuffed into the cars and not seatbelted…sounds a lot like my childhood. But, seriously, children are so much more safe when properly restrained.

11. Scooters and motorcycles are plentiful in this country. They seem to have their own rules. They swerve through stopped traffic, go the wrong way on one way streets and pile as many people on as possible. We saw a man and woman riding a motorcycle with a small sleeping child sandwiched between them, of course, not wearing a helmet.

I’m sure we’ll come up with more rules of the road during our stay. Everyday it amazes us the crazy driving we encounter. But the most surprising thing is the lack of accidents. We saw one accident on our way to the farm our first day here and Luzbia told me of another near the farm one day but beyond that we haven’t seen any others, even a fender bender. I don’t know the rate of traffic accidents here but I am certain it must be higher than what we’ve noticed. And if they restrain themselves as well as they do their children, fatalities must be high.

This was a woman crossing the very busy street with her food cart. I wish I been more prepared for the photo op. What you can’t see is the fact that her toddler daughter is riding on the food cart in front of her! Also, notice the dog. One must beware of dogs, chickens, cows, pigs, sheep, etc. while driving in Ecuador! 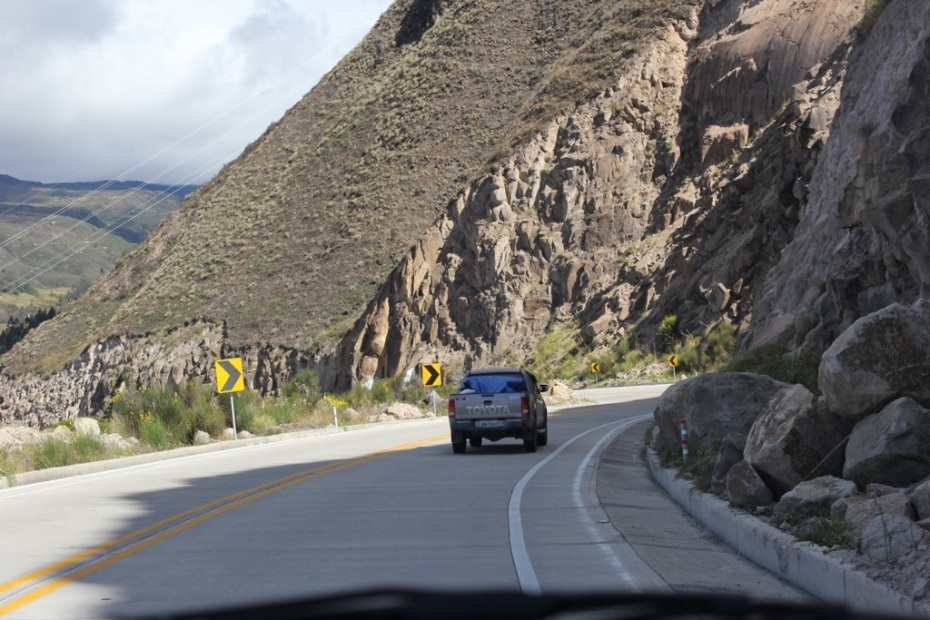 Now would be the perfect time to pass. 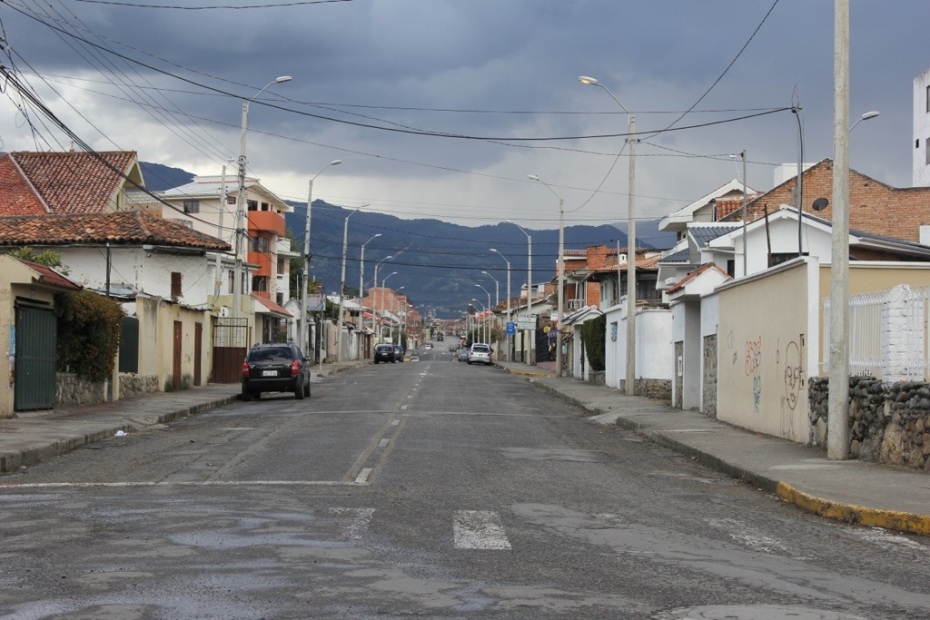 Seems like a perfectly legitimate way to transport livestock. 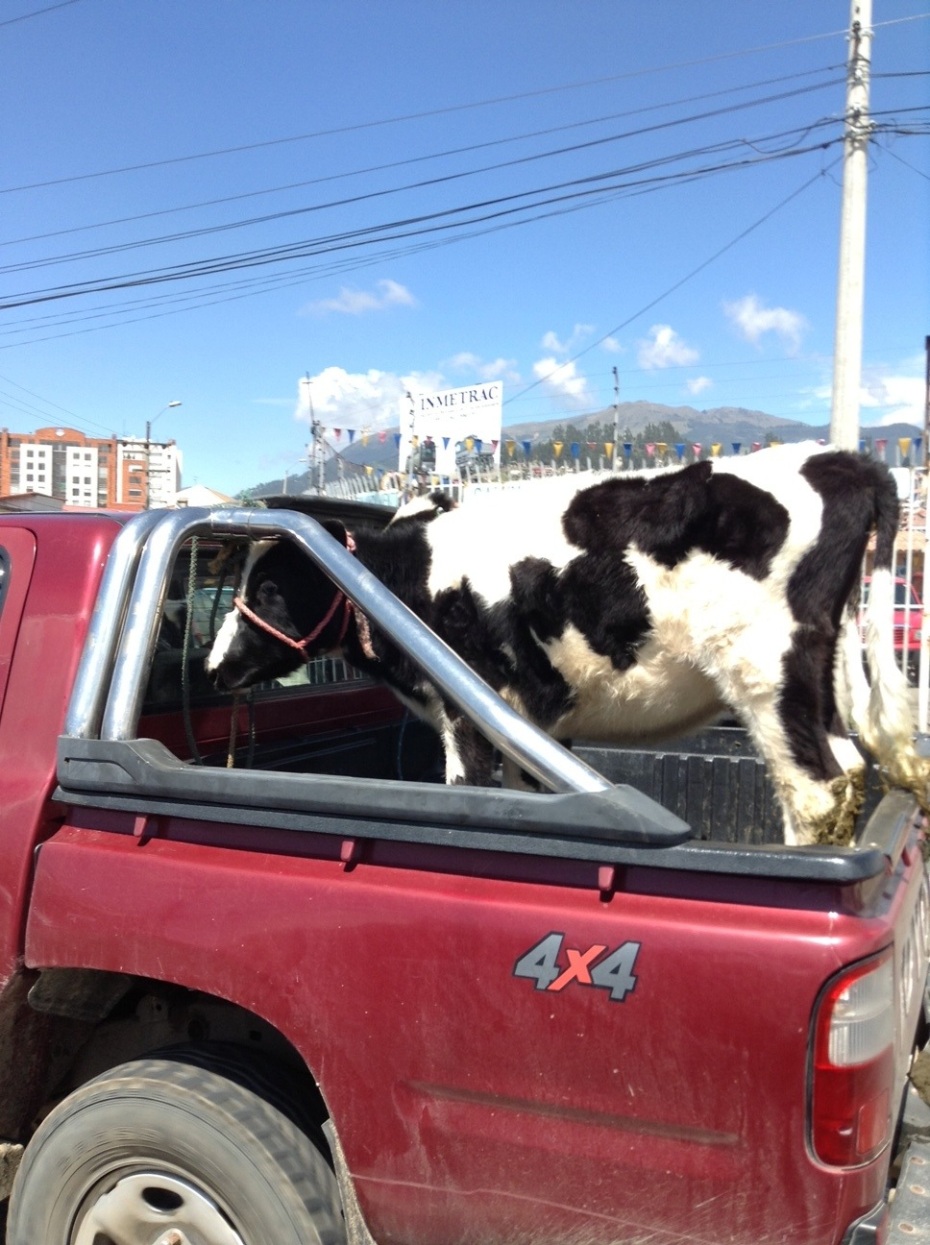